Time for Your Health

The Concept of Max Grundig Clinic

We view the health of the body and mind as a unity and thus actively further the vision of Max Grundig. He wanted the person as such to be in focus and not their respective illness. Connected to that the doctor’s mission to spend more time on the individual patient. Even nowadays we live and act by this message and even more – for over 30 years we follow and develop these guidelines and complement them with up-to-date findings in the fields of medicine and psychology.

This right extends to the medical part similarily as to the functional area, the rooms, the restaurant, and the whole complex. Max Grundig Clinic is build on three pillars: the internal medicine with a broad spectrum of specialized departments as well as excellent physicians, the check-up centre, and the psychosomatic department.

The combination of efficient medicine and the ambience of a top hotel creates ideal prerequisites for a quick recovery. The one-time only environment directly in the midst of the Black Forest, the scent of fir needles, and the pleasant atmosphere lead to Max Grundig Clinic being an unique place – to get well.

Maximum Diagnostic Security in Regard to the Person

The Max Grundig Clinic stands for state-of-the-art technology, first-class medical assistance, and time. Time for the patients and time for an elaborate diagnosis. The main focus: to prematurely recognize or eliminate illnesses.

In our clinic we therefore provide an interdisciplinary team, which works together hand in hand for the well-being of the patients. This way, the ultra-modern technology, that in turn is provided to our physicians, can be used in an ideal way. Amongst them the CT 128 Slices, the MRI 3.0 Tesla, an on-site laboratory, an endoscopy department, and a high-definition ultra sound.

Since we are dealing with almost every illness, we influence the decision of therapy significantly and thus clear the way for the therapeutic process. Consequently, the diagnosis is crucial – we are aware of this responsibility at all times.

To unite healthiness of the body and mind. We follow this vision of Max Grundig since over 25 years.

After his graduation from school and the completion of his craftman’s training, he studied Business Administration with emphasis on hospital economics in Mainz. Later he became assistent of the administrative director in the Clinic Niederbayern in Bad Füssing and after this administrative director in the Malteser Clinic von Weckbecker in Bad Brückenau. Before coming to Max Grundig Clinic, he was director in Medical Park Bad Rodach and the Therapy Centre Medical Park St.Theresien in Nuremberg. Since 2008 he is the executive director of the Max Grundig Clinic.

Prof. Dr. med. Curt Diehm is a specialist for internal medicine, cardiology, angiology, phlebology, and sports medicine. He studied human medicine at the universities in Heidelberg, Genf, and Paris. After an experimental doctor’s thesis about the therapy of acute heart attacks Prof. Diehm became research associate and assistant physician at the university clinic in Heidelberg. He habilitated there in 1984. He received his professorship in 1990. Between 1991 and 2014 Prof. Diehm was chief physician in the department of internal medicine in the clinic in Karlsbad-Langensteinbach, an academic educational hospital of the University of Heidelberg. Moreover, he represented the chair of sports medicine provisionally for several years at the University of Heidelberg. Since 2014 he is Chief Medical Officer at Max Grundig Clinic and senior physician in the cardiology department.

The Founder of Our Clinic 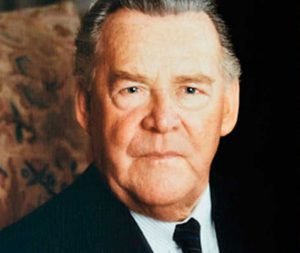 Max Grundig was born May 7th in 1908 in Nuremberg, where he grew up in meagre conditions together with his mother and his three sisters after the early death of his father Max Emil. By the age of 16 he became interested in the new medium radio. After inital tinkering in his own home he made his hobby into a profession in 1930 and opened a specialised store for radio sets in Fürth together with a partner.

The business ran well. Soon, Grundig employed his own three sisters, payed off his partner, and already produced 30,000 miniatur transformers by 1938.

The actual rise of Max Grundig into a leading entrepreneur in the entertainment electronics started after World War Second. On May 15 in 1945 Grundig inaugurated a production site for universal transformers in the Jakobinerstraße 24 in Fürth, while using machinery and resources from the war period. Fürth became the centre of his global corporation.

Starting 1952, Max Grundig was the biggest european producer of radio sets and the leading producer of tape recorders in the world. Soon television sets and dictating machines were introduced into his portfolio. 1971 the conversion into a stock corporation took place: the Grundig AG. Only a few years later the company occupied over 38,000 employees.

In the later half of the 1970s a new innovation, the video recorder, was introduced into the market and with it a rise of competition from Japan and later other countries from the Far East occured. In 1979 Max Grundig decided to cooperate with the Dutch competition Philips by providing them with a minority holding of his own company. Five years later he was leading the fundamental restructuring of the ownership structures in the Grundid companys, which was completed after two decades.

Max Grundig died on December 8th in 1989 in Baden-Baden. The brand Grundig survived until nowadays all over the world – as a label for innovative end devices in the entertainment electronics. However, Max Grundig was not only a legendary entrepreneur during the years of the “economic miracle”, but a person feeling deeply committed to the well-being of society. To him we owe the acquisition of the former sanitorium on the Bühlerhöhe, our beautiful clinic – the Max Grundig Clinic.

We are looking forward to welcome You: international@max-grundig-klinik.de